Add to My Favorites

Title:
A prospective plan of the battle fought near Lake George on the 8th of September, 1755 between 2000 English with 250 Mohawks under the command of General Johnson and 2500 French and Indians under the command of General Dieskau in which the English were victorious, captivating the French General with a number of his men, killing 700 and putting the rest to flight
Description:
In late summer 1755, a force of colonial militia advanced up the Hudson River with the goal of capturing the French fortress of Saint Frederic on Lake Champlain. Near Lake George they were ambushed by a large force of French and Indians and suffered terrible losses. The enemy was eventually forced to retreat, allowing the colonials to claim victory even though they abandoned the campaign against Fort Saint Frederic. This remarkable plan was drawn by Samuel Blodget of Haverhill, Massachsuetts, who probably served as a sutler (supplier of food and other necessities) to the militia.

Scale:
Scale not given.

Notes:
Oriented with north toward the upper right.
Relief shown pictorially.
Contains two battle scenes and a map of the Hudson River.
Said to have been "without doubt printed and engraved in Boston, by Thomas Johnston."

Notes (date):
This date is inferred. 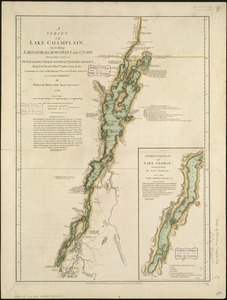 A survey of Lake Champlain, including Lake George, Crown Point, ... 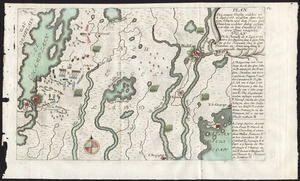 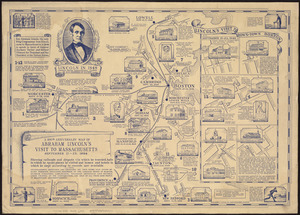 The 100th anniversary map of Abraham Lincoln's visit to ... 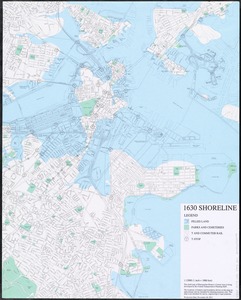