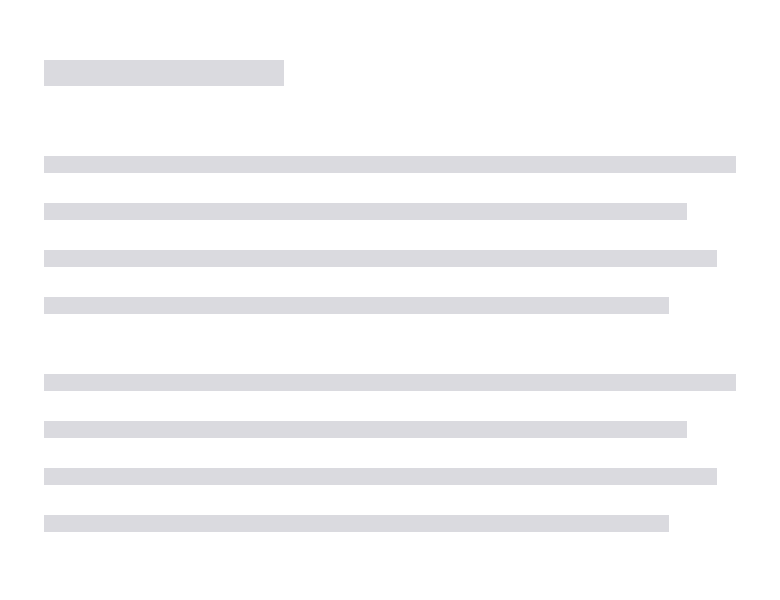 The Wonders of the World 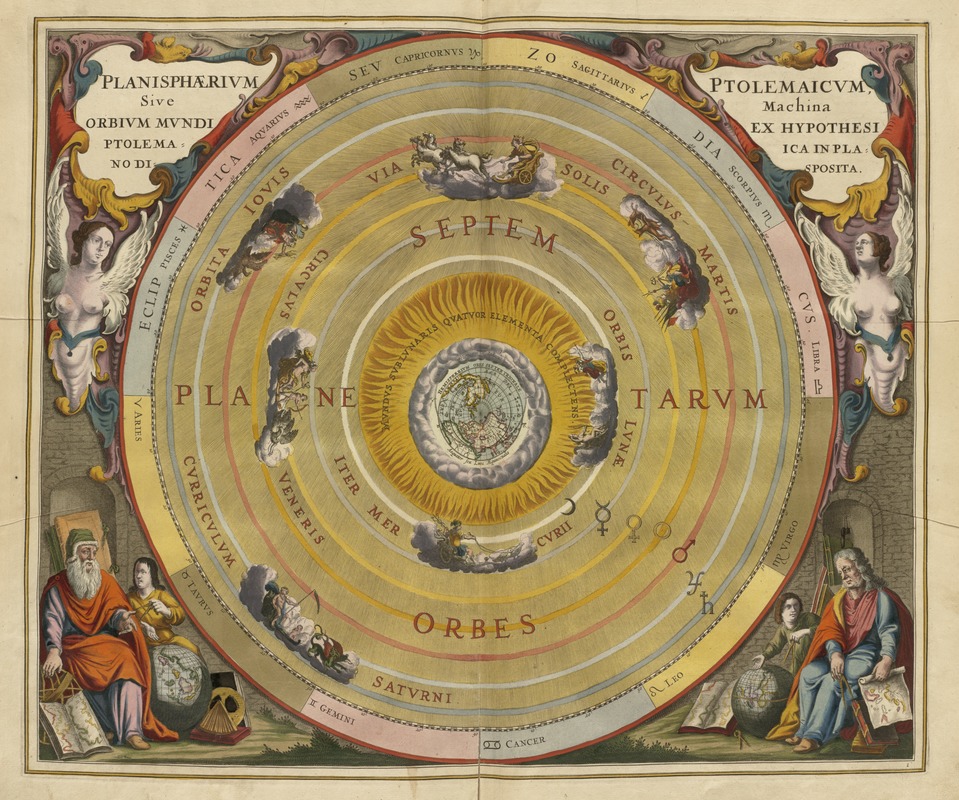 In the Wake of Poseidon - Classical Gods on Antique Maps

This map set was created by a middle school teacher with middle school students in mind. Specifically, it was designed for 6th and 7th grade Social Studies classes.
The purpose of this set is to encourage students to make connections between what they have learned about in Ancient Civilizations and what they know about Geography. Students will be asked to examine details and to make inferences.

Each lesson is designed for a 45 to 60 minute class, with time included for an introduction, independent work and a group debriefing. The lessons are also designed to be implemented with individual laptops or as a whole class projected activity.  Along with pages on this site there is a PDF file (link on page 2)  which contains spaces for students to complete the activities that go with the maps. If you are using individual laptops the students can tackle the work independently or in pairs. If you are projecting the lessons the students will work as a whole class. If you opt for the projected model of instruction, please consider turning the computer over to selected students so they can explore and model for their peers.

Introduction
Claudius Ptolemy was born in the year AD 100. As a Greek living in Egypt under Roman rule Ptolemy was very much a man of the Ancient World. His famous map, which was copied for over a 1000 years, depicts the world of the Roman Empire. From the Pillars of Hercules in the west to the threads of the Silk Road in the east, Ptolemy gathered details from sailors and scholars to fill out the world.

Activity
Travel in the Classical World depended a great deal on winds, which could either move a sailor swiftly to his destination or blow him into trouble, as Odysseus discovered. The Romans recognized twelve cardinal winds, which line up to the directions on a compass. Each wind was thought to have its own personality, so they were often depicted as blowing men or "wind heads".  Use the directions of the compass to name the wind which matches each of the directions. The first is completed as an example, use only the first name of each wind.

Thinking Question: Ptolemy’s map is rich in details and cities around the center of the map, while the edges of the map have few details. Why do you think this is? 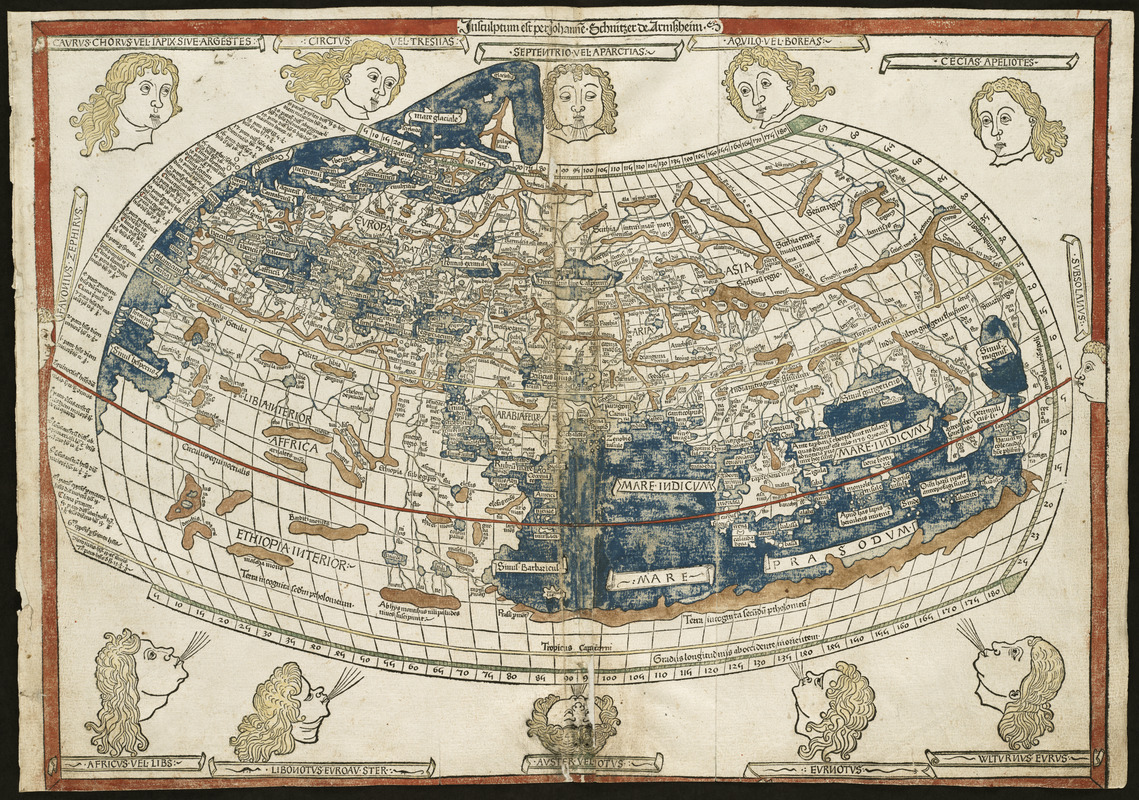 
Click on the map image to the right to access lessons and worksheets that accompany the following maps in this set.


These worksheets can also be found by searching In the Wake of Poseidon-Classical Gods on Antique Maps in the Lessons and Activities on the Tools for Teachers page.

Horoscopes and Hemispheres The Lessons 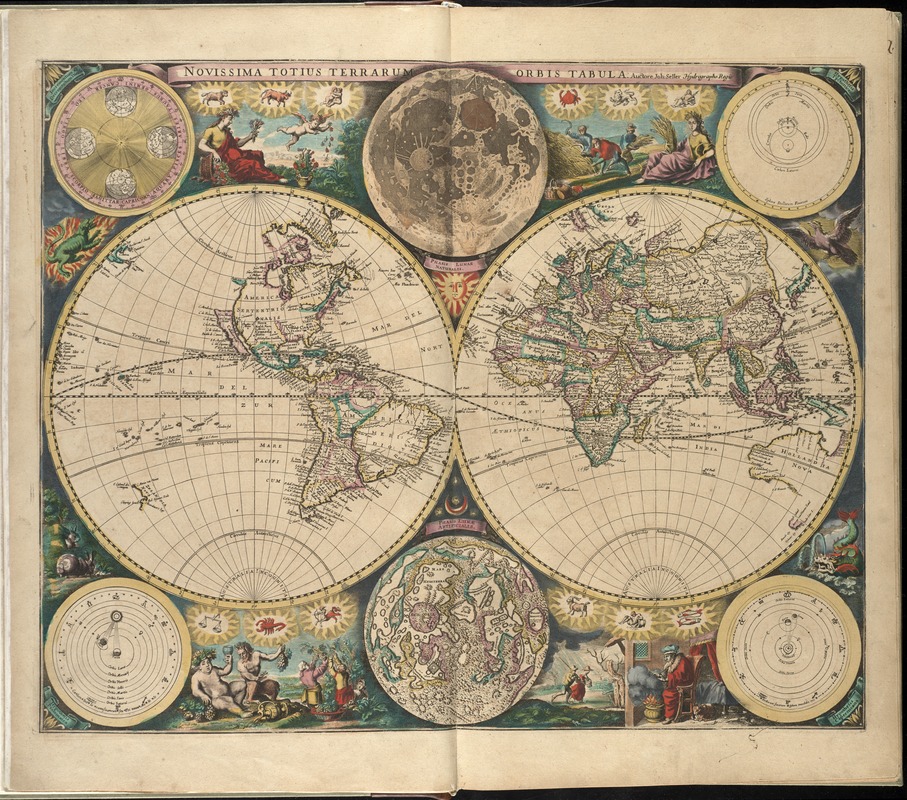 Introduction
Astrology, which is the study of the night sky to predict future events, has a long association with map making. All of the signs of our modern Horoscope are seen in the colorful pictures around the map. Our word Zodiac comes from the Greek for “circle of beasts”. The animal pictures helped ancient people locate stars and planets. It wasn't so much that the ancients really thought there was a giant bull in the sky, as it was a way for people to easily recognize patterns in a jumble of stars. Knowing the patterns of the sky gave them important information about when to plant or which way to sail.

In the days before pollution, big cities, and electric lights the night sky would have been ablaze with thousands of shimmering stars!

The circles in the four corners represent different theories about how the planets and sun went around each other. By the time this map was made (1672 CE) most educated people knew the planets orbited the sun, but just to be safe the mapmaker includes the “Hypothesis Ptolemaica” or Ptolemy’s Theory on the lower left. Ptolemy was the ancient inspiration for the first set in this map.

Thinking Question: Ptolemy was a very wise man, but did he get it right in terms of how the solar system works?

The four seasons are depicted around the edges of the circles, starting with spring in the upper left and winter in the lower right. How are each of the seasons represented in the pictures? What are the people or gods doing? What do you notice about the plants? What animals are chosen to represent the four elements (air, fire, earth, water)?

Thinking Question: Why did the mapmaker include so many details that are not exactly places and oceans?
4

The Celestial Chariot Race The Lessons

Introduction
Once again we see the long shadow of Ptolemy on map making, this map playfully illustrates the Ancient Greek geographer’s idea of how the planets orbited the Earth, or at least the five planets known at this time.

While some ancient civilizations such as the Maya and the Babylonians had the basics of the solar system down long ago, other features such as the moons of Saturn, Neptune and Uranus were visible only with aid of telescopes.

The planets are not shown as they would appear through a telescope, but instead as their namesake gods in their signature vehicles. The Greeks and the Romans worshiped the same gods, but under different names. For example, the god of wine, women and song was called Dionysus in Greece and Bacchus in Rome (this was the god of autumn on the last map). As it happened, the Greek names endured in mythology while the Roman names endured in astronomy.

Activity: Using the provided sheet (link on page 2), match the Greek God to their Roman equivalent, using clues in the pictures. Click on the map to zoom in and get closer to the galloping gods in all their glory!

Thinking question: The bird women on the sides are called Harpies, and they represent destructive winds. What do you think is represented by the men and boys shown in the lower corners?
5

The Wonders of the World The Lessons 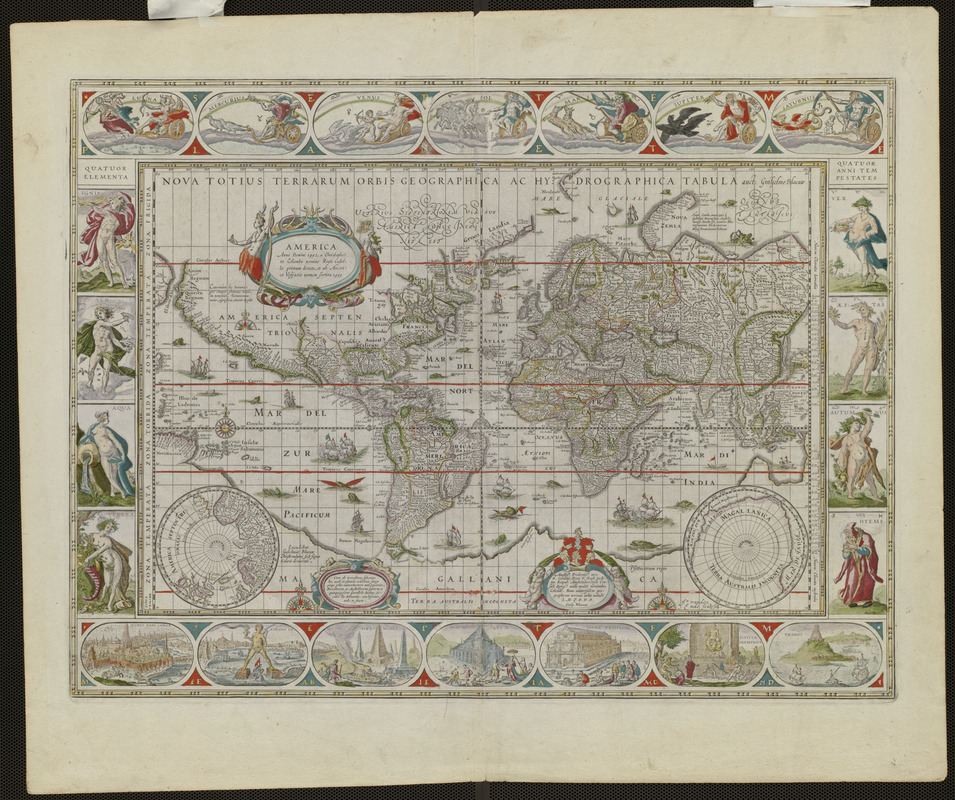 Introduction:
This map truly has it all! Across the top we see the known planets represented as gods, the elements grace the left border, while the seasons appear on the right. Harpies and cherubs brace scrolls, while a bevy of monsters menace ships at sea! What makes this map extra special for students of Ancient History is its depiction of the Seven Wonders of the Ancient World. The Wonders list was essentially a tourist guide for Greeks living around 200 BC, these were the things to see. It should come as no surprise then that all of these wonders were fairly close to the Mediterranean Sea, where the Greeks sailed.

Thinking Question: Being a tourist in the Ancient World was much different than our modern world with airplanes and hotels.  What kind of planning would an ancient traveler need to do before setting out?

Activity: A guidebook of sorts written by a well traveled Greek described the wonders thusly,
I have gazed on the walls of impregnable Babylon along which chariots may race, and on the Zeus by the banks of the Alpheus, I have seen the hanging gardens, and the Colossus of the Helios, the great man-made mountains of the lofty pyramids, and the gigantic tomb of Mausolus; but when I saw the sacred house of Artemis that towers to the clouds, the others were placed in the shade, for the sun himself has never looked upon its equal outside Olympus.

— Greek Anthology IX.58
Question: Which Wonder seen on the map did the writer leave out of his passage? What purpose did that missing Wonder serve?

Thinking Question: The only Wonder with us today is also the oldest Wonder by far, the 4,500 year old Pyramids of Egypt. However, the Pyramids on the map look nothing like the actual Pyramids! Why do you think that is?
6 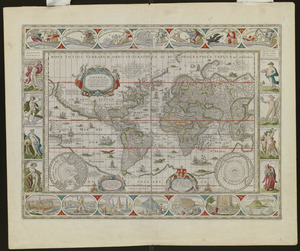 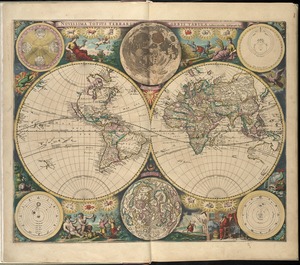 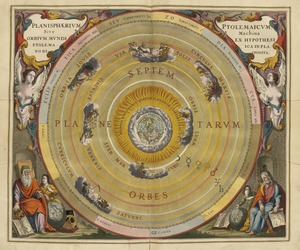 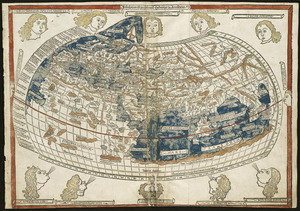 5. In the Wake of Poseidon: Classical Imagery on Antique Maps

Share: In the Wake of Poseidon - Classical Gods on Antique Maps

Submit your Map Set to the LMC Map Portal

Approved map sets will be discoverable through the map sets search. Other users will be able to find and use these map sets.

Once your map set is approved, you will not be able to make further changes to it unless you duplicate it.